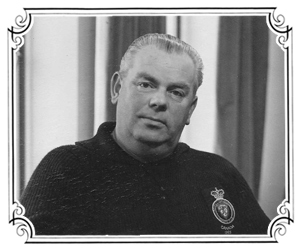 "Dave" started curling outdoors in the 1930's, winning many outdoor bonspiels (most notably The Moy Hall Trophy at Grantown-on-Spey in the 1960's) He held the office of President of Ardclach Curling Club 1953-55 and 1965-74.

He took up the indoor game when Aviemore Ice Rink opened in 1967 and in Inverness the following year. In 1967 he skipped the rink that won the first Allander Trophy (North of Scotland Men’s Open Curling Championship).

He was the first north curler to be selected for an RCCC tour to Canada to play for the Strathcona Cup in 1965 and ten years later he was again selected for the RCCC Scottish team to tour Germany.

Passionate about Moray Province curling, he donated the Macarthur Cup to be played for in the Moray Province League Division 1. He was Province President 1969-1973.

On the 6th of May 1974 on motion of Jimmy Cattell and seconded by Austen Berry Dave was unanimously elected “Honorary President” for his services to curling in the Moray Province throughout many years.

Dave continued to serve curling as an Honorary President till his demise in 1983 at 59.”Taken to early”.