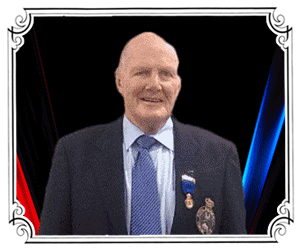 Bill, or equally as well-known throughout the North of Scotland as “Mr. Curling”, has spent a lifetime involved in curling starting with playing the game as a young boy when the sport was mainly played outdoors.

Moving to Darnaway in 1968 he quickly established Darnaway Curling Club from what used to be Dyke Curling Club. He was a natural organiser and quickly set up the Moray Estates Bonspiel which attracted curlers from all over Scotland. Over the years he took on all the administrative roles within the Club he had helped found before sharing his time and talents with Moray Province.

His desire to continue supporting curling in the North led to him taking on the Treasurer’s position for Area 10 (now Area 13) for almost twenty years until 2005. Initially it was not an unusual situation for him to have to pay invoices from his own pocket until the Club levies came in! Not a sustainable situation and one he set out to improve so that the Area had a healthy bank balance to meet its commitments for not just Area bonspiels but also incoming International Curling Tours. Without Bill, much of that would not have happened in what became a golden period for Curling in the North with rinks not just in Aviemore and Inverness but also Brora and in Elgin.

Moray Province was extremely fortunate to have him as its Secretary during that time as he oversaw the expansion of Moray Province in 1994 into an East and West based at Elgin and Inverness respectively. He ensured that the Province although now playing out of two ice rinks almost 50 miles apart, remained a single Province and something that continues to this day.

Whilst those roles within Darnaway, the Province and Area 10 kept him busy, he still found time to organise The Glenfiddich Top Rinks Championship at Aviemore throughout the 80’s as well as serving on the extremely popular ‘Highland Week of International Curling’ Committee for twenty one years until 2007.

Retiring from that only opened up time to take on the setting up of the Moray Province Curling Development Group: a new challenge but he more than met in keeping the sport moving forward in the 21st century. Province Webmaster was another role he willingly took on and kept the Province curlers well informed with news and results for over ten years until handing over the reins at the end of last season.

Although those various roles have taken most of his time in recent years, he still found time to play and was no mean curler in his day, playing for his Club and also in the Kerr rink in the Province Knockout with a number of successes in the Dalcross Salver.

Not surprisingly his dedication and commitment has been recognised by both Darnaway and Moray Province in awarding him Honorary Memberships in 2006 and 2001 respectively. SportMoray also added to those awards with one in 2009 for ‘local service to sport’.

For someone who has lived and breathed curling for so many years, he was proud to achieve 50 years membership of the RCCC in 2017 and with it receive his 50-year medal.