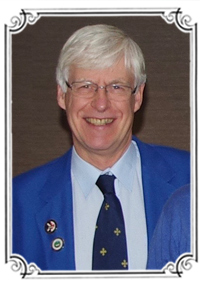 Alan was given the Province Achievement Award in recognition for, not only his services to Moray Province having served on Committee as well as being its President from 2001-2003, but for his commitment to umpiring which started in 1997 before volunteering for his first International Championship- the World Men’s’ Curling Championship in Glasgow as a Time Clock Operator.

That only enthused him to become even more involved in umpiring and in 2004 he was invited to be a Game Umpire at the European Championships for the first time, with more to follow.

His achievements have also extended to the playing side as a member of the RCCC Centenary Tour of Canada 2003 and winning the Strathcona Cup.

(He was Vice Captain touring the West) plus winning the Scottish Seniors Mixed Championship in 2009 with Lindsay Scotland’s Murrayfield Rink.