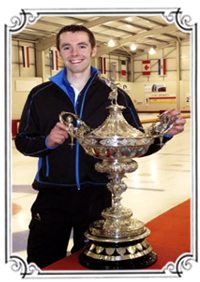 Ally Fraser started his curling career with Ardclach Curling Club at the age of 13. He quickly showed great promise, taking part in schools and junior competitions. In 2009, along with skip Graeme Black, Steve Mitchell and Thomas Sloan, Ally won the Scottish Junior Championship at Perth beating the highly talented Dick team from Edinburgh. Ally, along with his teammates, went on to represent Scotland at the World Junior Championships in Vancouver.
N.B.
The following year Ally successfully defended his Scottish title, this time skipping the team of Steve Mitchell, Scott Andrews, Kerr Drummond and fifth player Blair Fraser. They dominated the finals at Curl Aberdeen, going through the round robin undefeated.

In a thrilling final Ally and his team beat Perth's Glen Muirhead to be crowned "Scottish Junior Champions 2010" and the honour of representing Scotland at the World Junior Championships in Flims, Switzerland. Here the Scottish boys recorded 8 wins and 1 loss at the round robin stage and a win over China in the semi-final guaranteed them a spot in the final against Switzerland's Peter de Cruz. Peels after 9 ends of high quality curling from both teams resulted in Switzerland scoring 1 to win gold and Scotland to bring home a well-deserved silver medal.
Thanks G. Macarthur.