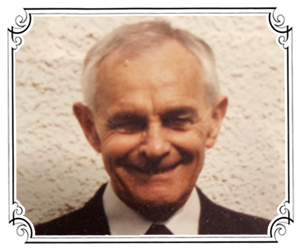 Bill Fraser Moved North from Aberdeen and as a sports person was a loss to them while a great asset for us in the North.
His prominent sporting career east the country included as a Bowling Club and National champion as well as playing cricket for Aberdeen shire alongside his two brothers. Sport was obviously a family trait.
On his arrival in the North around 1974, Highland Bowling Club were quick to sign him and by 1997 he was President of the bowling club and was well established with Ross County cricket club a relationship he maintained with these two clubs for many years.

His curling career took the course of joining Dalcross C.C. when Duncan MacPherson a prominent competitive curler asked him to join the club around 1974 when the family came to live in Inverness.
Bill took too curling hook line and sinker both on and off the ice with Dalcross CC. As well as becoming a very competent curler very quickly he took on many roles within the club, he spent many years serving on the management committee on either side of fulfilling office bearers positions.
Bill became Treasurer in April 1977 and in March 1978 he added the post of Secretary and continued as Secretary/Treasurer until April 1983.
He then was elected 1 President of Dalcross C.C from 1984 to 1986.
Bill continued to curl right up until 2013 and his competitive nature won him many Moray Province trophies over the years including the Open KO winner, League Winner, Dalcross Salver Winner and maybe one or two more on repeated on occasion.
Over and above being a staunch Dalcross member Bill fulfilled other prominent roles within curling, why?? Because that was the man he is enthusiastic willing and capable of all that he takes on.

3/ 1997 Selected for the U.S touring team and of course acting Secretary just as an aside!

4/ 2003 Made an Honorary Life member of The Moray Province.

5/ 2012 Made an Honorary Life member of Dalcross Curling Club.

Bill Fraser is a talented all round sportsman a true gentleman and is a friend to many.