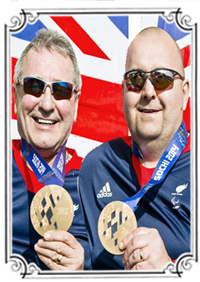 2014 Winter Paralympic Medallists, Sochi, Russia. Originally Gregor was the only team member from Moray till unfortunately Tom Killin took ill and was unable to travel so Jim Gault was allocated his place.

Jim obviously was pleased with his selection but he has been in the Scottish Squad for the past four years so he was well prepared.

They finished 4th at the end of the round robin matches, having won five and lost four.
A semi-final defeat to Russia meant Britain met China in the bronze medal game where they triumphed 7-3. A Bronze Medal for GB a tremendous effort hard to bare.