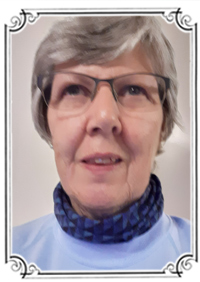 Sandra joined Forres Curling Club in her early teens and was one of the first pupils to learn curling with Forres Academy in doors at Inverness Leisure Centre.

Following a break she picked up curling again in the mid-1990s becoming an active member of Forres C.C. rising to the dizzy heights of President.

Coaching: - Sandra is an active member of Moray Province Curling Development Group (MPCDG) since 2008 and is currently the Lead Coach for a number of groups.
N.B to 2020.
These Groups now include the Virtual Club, Try Curling, Beginners and those with levels of disabilities. She also leads the complete Curling’s Cool programme for primary school children.

She has certification in Wheelchair curling, Stick curling, Timekeeping, Umpiring and is also an assessor for Scottish curling in Level 1 courses.

Sandra's devotion to the sport has not gone unseen and she has been nominated for a number of awards including sportMoray Coach of the year and sportScotland Coach of the year, shortlisted in them all.

Sandra's dedication finally saw her being voted in as the Northern County Ladies Curlers President in 2018 and represents the lady curlers in this area for the RCCC. This role is currently extant.

Sandra is a committed Coach who willingly gives up her time to coach all in the area and Moray is extremely lucky to have her involvement and enthusiasm as she is a strong believer in CURLING IS A SPORT FOR EVERYONE!