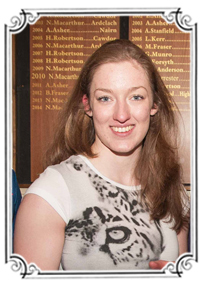 Season 2017 – 2018 was for Amy MacDonald marked out as the most important one in her curling career to date mainly because it was her last one as she would be aged out as a junior at the end of the season.
Amy had started back in 2007 with the Moray Province Curling Development Group and she took to the sport like a duck to water, each season she progressed beyond expectation and was soon away south joining up with other rinks in Junior Slams having various successes but definitely gaining experience and improving her game.

In season 17/18 she teamed up with the Rebecca Morrison Aberdeen rink. It was 3 out of the 4 members last year as a juniors and they were determined to win the Scottish

The season started in September and proved to a very busy competitive season which fitted the plan fine, starting @ the Braehead open and then onto the European Junior Curling Tour followed by the Scottish Junior Classic, where they played 3 of the 4 events, came third at Greenacres and won both the Kinross Junior classic and Inverness Junior International.

At last the Scottish Juniors. They had up’s and down’s in the qualifying week but managed to qualify to the semi-finals where they played team Jackson the reigning champions, fortunately they played their game of the week to make their way to the final.

The final was a tense affair but their team had experience on outside, with 3 of them having previously played in a final. Each team’s last stone in the tenth end was very tense! Rebecca drew behind a series of guards to lie shot but slightly open and behind the Teeline. After a timeout from team Bryce their elected shot was fractionally heavy, and rubbed past our shot stone. We were Scottish Junior Champions.

Their World Championship event began with a game against Norway. The week was long, exciting and emotional. They had achieved their goal of getting to the Worlds but it was was slipping away. That week our inexperience on the world stage showed and they were relegated to the B Division but not before they beat Team Canada, the eventual winners of the event.

However the experience was invaluable the competitors very sociable and for Amy the pièce de résistance was being the recipient for the Junior Sportsmanship Award as voted by the other female competitors. Amy was the first Scottish female to win this accolade.