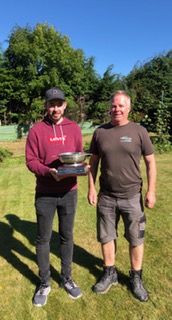 After the loss of an entire season, Province curling finally kicked off at both Inverness Ice Centre and Moray Leisure Centre this week.
It was difficult to remember who last won what, but in West Division 1, Ally Fraser just pipped Ali Asher in a tight match. 4-4 after 5 ends, the Ardclach lads blanked the sixth and picked up their single shot for the win in the seventh.
Newly promoted Mike McInnes was always in control against Larry Kerr,an opening end three and a single steal giving McInnes a clear lead and a further three and a single steal in ends 4 and 5 saw him run out a 9-3 winner.
Mark Fraser’s Dalcross rink chalked up a good win over defending champions the Greenwood rink. The Ardclach quartet outscored Fraser in ends won,but a pair of 3’s was enough for a close 6-5  Fraser victory .
In Division 2 Jamie Cattell was a 9-3 winner over Ian Thomson, a 3 at the opening and closing ends decisive in a slightly one sided contest.
Angus Forbes came out on top in his match with Fiona Steel’s Nairn Ladies, a couple of 3 shot steals giving him a 10-2 lead before Fiona picked up a 3 of her own at the last to at least give a Ladies some consolation.
In the East, Division 3 opened with  a good win for Gordie Kennedy in what was largely  a battle of the youngsters. Sons Charlie, Ian and Aunty Lynn skipped by a rusty old Dad running out 10-5 winners against Owen Watson’s Moray Juniors.
Georgia Clarke’s Juniors rink had a real ding dong with Helen Downey’s veterans. Fighting back from a 3-0 deficit, Georgia’s team picked up the shot they needed in the last for a 4-4 peel.
Charlie Watt jnr’s perfect form continued with an 8-6 win over Elgin’s Bob Stewart. The Forres team had a 100% record in the last League campaign and proved they are still a very tough nut to beat.
Next week sees the start of  the East Division 1 and 2 campaign and we fervently hope that we will have a full,uninterrupted curling season.
Bill Jaffrey